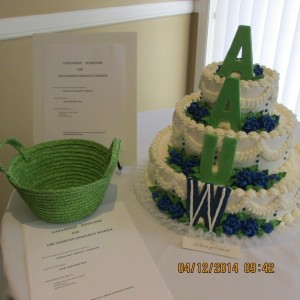 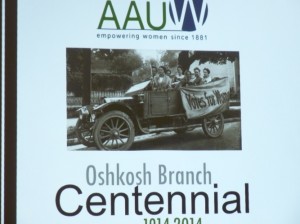 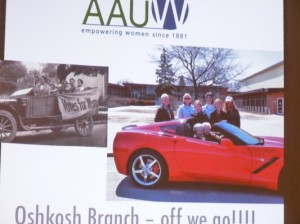 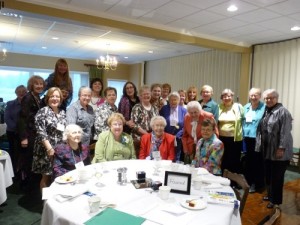 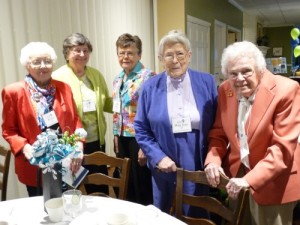 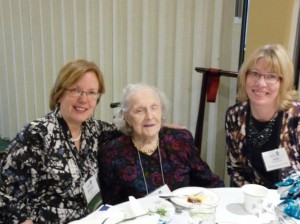 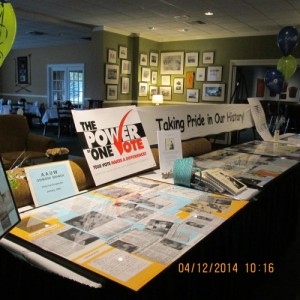 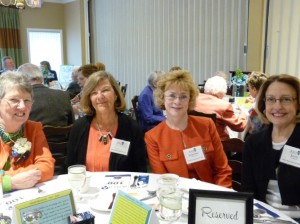 In February and March 1914, ten women gathered to form the Oshkosh Division of the Fox River Valley Branch of the Association of Collegiate Alumnae, which became a separate branch in 1915.  Under the able leadership of Barbara Cook, the Oshkosh Branch Centennial Committee has organized a series of activities constituting a celebration that will make 100 years of history come alive.

Our first centennial project was to publish a new edition of the branch cookbook compiled for our 75th anniversary in 1989, updating it by adding new recipes contributed by current members.  Sales of  Stirring Up Memories Again have been brisk, but copies are still available at only $15 each!  Contact us via email at  aauwoshkosh@gmail.com.

A silent auction held at our Holiday luncheon in December raised enough money to fund our Centennial Giving Project, donating one $100 check each month of 2014 to a different non-profit organization that actively supports the AAUW mission of advancing equity for women and girls. Beginning with the Boys and Girls Club of Oshkosh and the Winnebago County Literacy Council, we will be helping organizations that provide low income children with clothes (Take Five), books (Dolly Parton Imagination Library) and school arts programs (SOAR), in addition to seven other worthy causes.

At our January meeting, as we toured the Morgan House, a lovely restored Queen Anne style mansion in downtown Oshkosh, across the street from the home where our founders met a hundred years ago.  Using both our well-preserved branch records and 21st century tools like Ancestry.com, we researched the lives of our ten founders, and ten current members introduced them to us. We found that most of our founders were in their thirties or forties in 1914, and that 60% of them lived to be at least 88, with only one woman dying before age 60, clearly disproving misogynist claims that education was bad for women’s health.  Half of our founders were associated with the Oshkosh Normal School, as either faculty or graduates, previewing a consistent connection between the Oshkosh Branch and our Community/University partner and AAUW institutional member, known today as the University of Wisconsin Oshkosh.

That connection has grown stronger in recent years, as our University Liaison MaryBeth Petesch has forged ties with the UW Oshkosh Women’s Center and its director, M. Geneva Murray, a certified AAUW $tart $mart facilitator and an Oshkosh branch member.  Geneva obtained funding to hold an AAUW Elect Her workshop on February 15 that several branch members will assist with, hoping to generate more female student leaders.  Through that program, and with branch Centennial funds matched by UW-Oshkosh Chancellor Richard Wells, two UW-Oshkosh students will attend the AAUW National Conference for College Women Student Leaders in June for the first time.

On March 4 from 6-8pm at the Reeve Union Theatre on the UW-Oshkosh campus, the Oshkosh Branch and the Women’s Center are co-sponsoring “Suffrage in Sawdust City,” a free performance depicting a fictionalized debate about tactics between Oshkosh’s own prominent suffrage lobbyist Jessie Jack Hooper, portrayed by the author, and Doris Stevens of the National Woman’s Party, a radical suffragist jailed for protesting for the vote, portrayed by Geneva Murray.  Since the suffrage struggle was intense when our branch was founded, this seemed an especially appropriate Women’s History event for our centennial year.  See the Facebook page about this: https://www.facebook.com/events/223374627840064/

The culminating event for 2014 will be our Centennial Celebration on Saturday, April 12 at 10:30am at the Oshkosh Country Club, south of the city on Highway 45.  We hope that many members of other branches will join us, and we expect to enjoy both an enlightening historical program and a wonderful brunch.   Further information and the official invitation are available at both the state website and our branch website, https://oshkosh-wi.aauw.net/.  Be sure to send in your reservation by April 1.

Organizing this centennial has energized our branch, as many members have worked on our various celebratory activities.  We have also raised our profile both on campus and in our communities, which we hope will attract new members and still more energy.  We focused our meetings in this half of our centennial year on honoring our past; we will focus our Fall programming on issues that will propel us into our second century.  We’re ready for it!